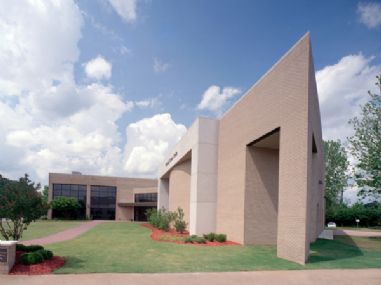 B. B. Comer Memorial Library was built at its current location on Broadway Street in downtown Sylacauga, Alabama in 1977. A stark, modern tribute to 1970's architecture, its dark woods, brown brick paver flooring, and orange and brown striped carpeting served its constituents well for decades.  By the early 1990s, the library, which serves not only the city of Sylacauga, but also Talladega County and surrounding areas, had grown tired and very cramped.  That's when its director began a decade long fund raising and planning mission that resulted in the additions and improvements to the building completed in 2003.

The addition includes an angled main corridor linking the existing rectilinear building with a new 28‑foot high lobby and genealogy room along with a triangular meeting room/auditorium. The new auditorium is a multi purpose room that, along with an additional smaller meeting room, serves to fill a growing demand from the community for more meeting space. This main addition then allowed for the interior renovations as well as a two story addition at the rear of the building that added much needed book stack and seating space.

The City of Sylacauga
Sylacauga, Alabama